We’ve achieved another major win this year – the British Property Gold Award for the East Midlands.

This regional award highlights our continued outstanding customer service and follows on from our previous success in this competition as the British Property Gold Award for Lutterworth, our home town.

“We’re absolutely thrilled to have been named Best Estate Agent in the East Midlands by the British Property Awards,” said Kay Marden, head of residential at Wells McFarlane. “This was a total surprise, as these awards are judged entirely on customer feedback, which makes it all the more satisfying.”

Quickly gaining recognition as the most significant property awards in the country, the British Property Awards team personally ‘mystery shop’ over 90% of estate agents in the area, receiving feedback directly from customers and Wells McFarlane was awarded the Gold standard for the East Midlands best based on this.

Robert McLean from The British Property Awards said, “Our awards are specifically designed to be attainable to all agents, removing common barriers to entry such as cost, to ensure we have the most inclusive awards. If an agent has been attributed with one of our awards, it is simply down to the fantastic customer service levels they have demonstrated across a long period of time.”

Kay was joined by Wells McFarlane’s practice manager, Amanda Lambert to receive the award from Martin Roberts (Homes under the Hammer) at an awards ceremony in central London. 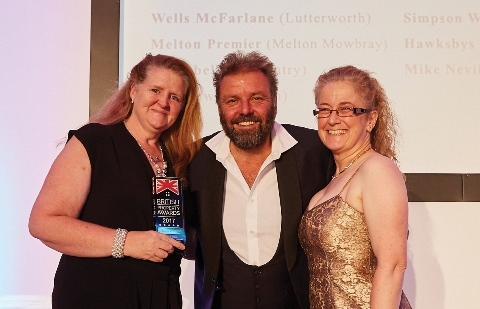